Mirra Bliss
​​
A brilliant page in the History of
Auroville

In Pondicherry, from Ashram, when you go beyond the canal on Jawarharlal Nehru Street, after three cross roads you reach to a Cafe`on your left - yes, that is Indian Coffee House.
Exact address is 125, Nehru Street, Heritage Town, Puducherry.

Well, it is simply a Coffee House, what else about it !
There is a greater meaning and importance connected with it.
Let us have an eye-witness account. 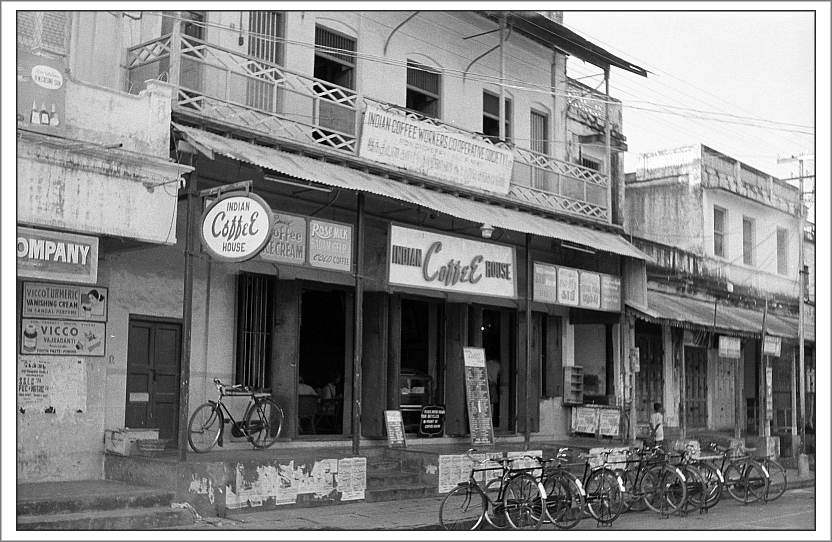 Indian Coffee House during 1973-74 - Picture taken by '﻿John van der Woude﻿'.
Well, the Coffee House has its own special values and is known for -

- it is one of the heritage buildings in Franch-indian style of Pondicherry.
- it serves excellent traditional fine coffee.
- it is operated by coffee workers' co-operative society.
- It is a chain restaurant from the Coffee Board of India.
- it is on Nehru Street with a large picture of Sri Nehru ji without his trademark cap - 'Nehru Topi'!
- of course, the birth-place for the movie 'Life of Pi' too!

Ask anyone in Pondy and will say it is just different !
Why?
It is because of its variety of visitors-
Ashram residents, Aurovillians, Pondicherrians, expats and tourists.

Some addicted to its coffee, some to its French Toasts and some to its traditional south indian
Vada Sambhar and Dhosai!
Some, like me, love its old style high-ceiling, greenish walls, lazy fans, mixed smell of Coffee and Sambhar with the many noise of
utensils, customers and outside traffic with the slow sips of coffee!
A perfect atmosphere for a writer!

Frankly, for most of them, it is coffee and conversation that matters
- and you can sit here as much as you can!
Well, well !
we are very near to its very brilliant historical point -

that food, Conversations and free limitless time for sitting
and to add, the surrounding bazzar full of items for livelihood and to catch some silent moments at Samadhi
of Sri Aurobindo and the Mother - believe me, all these made those very early Aurovillians
this  Indian Coffee House,
a must place for their life on the far-off land of south India which is not yet much changed
- even in this 'wi-fi era', it is the same! 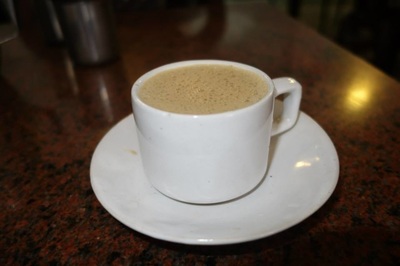 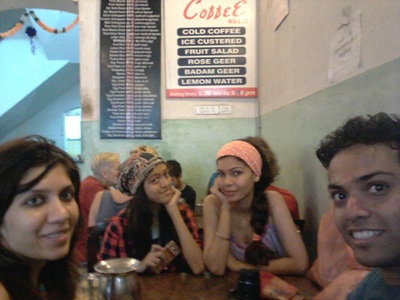 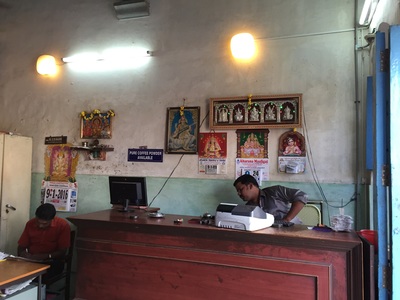 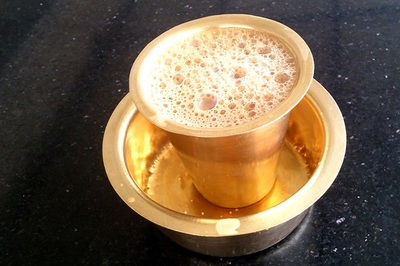 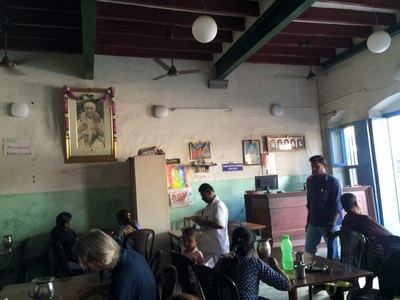 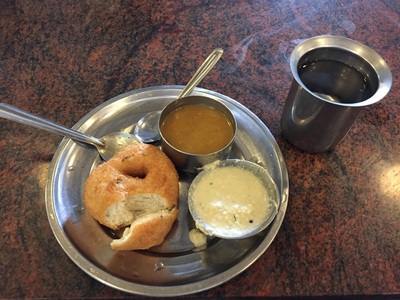 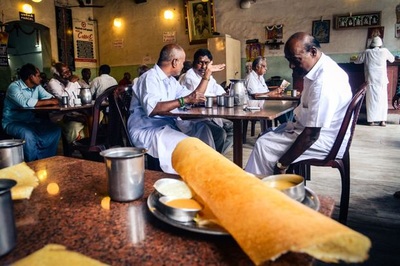 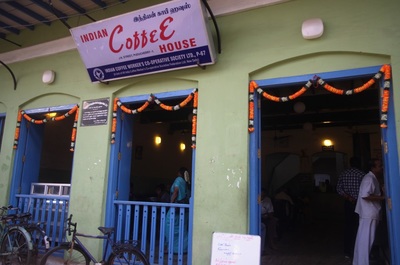 These early Aurovillians used to visit this Cafe` right in the morning or in the afternoon
for coffee and breakfast
on their only vehicle - bicycles, tying their younger kids on their back!

Those warriors of the Divine Work upon the earth didn't have
much money to entertain themselves with items of luxury and had no warmth of relatives and society.

They were very simple,
doing the very basic work of life so that they could devote most time to build a solid Divine Truth on
this land as per the Mother's Dream
- putting everything behind, even not cared for the great education
and wealthy remarkable future of their young children!

If India has written many attacks and wars with the invaders to her history,
she must also write this bold helping hands to restore, rebuilt and rebirth to a new form
her great ancient heritage of spirituality!

This cafe`on Nehru Street of Pondicherry - Indian Coffee House had not only provided
these early Aurovillians just coffee and food to suit to their pockets
but the humble staff of this cafe`always at their help.
Never disturbed their children playing all over in cafe`,
instead making them happy with some coloful free toffees!

They used to keep an eye on these children when these foreigners were shopping around in the bazaar
for grocery, chairs, traditional coir bed, or new a bicycle.
The language was the barrier so the manager used to serve a free dish of many items of food to the whole group to acknowledge the taste.

Well, that free time to sit in the restaurant at your wish was a real boon!
The maps were laid down on the tables
and the whole group engrossed in many discussions for hours -
some maps were of the civil-drawings and plans of the buildings to built and some were of boundaries
for growth and vegetation planting.

Their gestures showed that
they were discussing even very minute detail as if they had taken this task
as a holy devotional prayer!

Even today, it is the same practice and procedure among Aurovillians for bringing a new plan.

The result of these early activities at this Cafe`over a cup of coffee and food
brought a slow but very sturdy growth of Auroville.

Indian Coffee House became a silent witness and helper of the evolution for the dream of Auroville -
a difficult and massive work to be accomplished for the Divine Truth
in the very stagnant material life.

It has its solid share and footprints in the history of Auroville.
Even today, it the landmark and meeting point
for Aurovillians.
My father, Dinubhai K. Dave, trained during 'A.B.Purani Era' in Gujarat, India and had worked some years in the Ashram type School of Late Sri Labhshankarbhai Vyas at Nargol, Gujarat ( his son and Ashram Student, Kiranbhai Vyas running a great Yoga Center near Paris in France.) used to talk to them and told me many things which I was not able to understand. That was the time during 1977-79.

Afterward, whenever I visited Pondy, I visited, (even in last January of 2016), this Cafe` too and remember those days. I always salute the building of this great cafe` - Indian Coffee House - to be a mute witness of
early Aurovillians' hardships, meetings, discussions, their activities
and the great dream they were devoted too.

Never forget to visit this simple Coffee House to pay your homage !